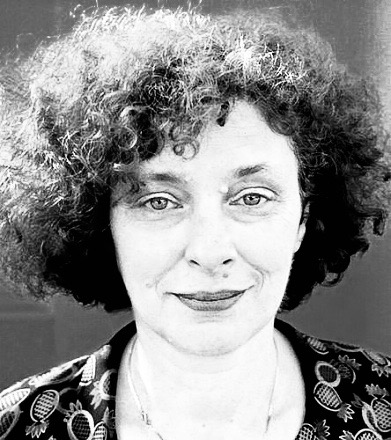 is a Polish poet, essayist and journalist. She studied Polish Studies and Philosophy at the University of Warsaw, where she now lectures in the Gender Studies Department. She lives in Warsaw. Her poems are complex narrations oscillating between the world of dreams and sharply sketched historical and social reality. Her Utwór o matce i ojczyźnie (On Mother and Fatherland, 2009), the life story of a Mother and her Daughter saved from the Holocaust, whose Mother imprisoned in her suffering won instant and widespread acclaim and been referred to as “a mixture of opera, tragedy and oratorio”. Apart from poetry, she has also written the literary study Postać z cieniem. Portrety Żydówek w polskiej literaturze od końca XIX wieku do 1939 roku (Figure With a Shadow. Portraits of Jewish Women in Polish Literature from the End of the Nineteenth Century to 1939, 2001) and a collection of critical texts Barykady. Kroniki obsesyjne lat 2000-2006 (Barricades. Obsessive Chronicles of the Years 2000-2006, 2006). Her essays and opinion pieces have appeared in such newspapers and journals as Res Publica Nowa, Gazeta Wyborcza, Ex Libris, Twórczość, Kresy, Midrasz, and Zadra. She is also a film critic. “The narrative of Polish behaviour during the Holocaust, forged under occupation and still officially valid today, goes as follows: 1. only in Poland could people receive the death penalty for hiding Jews; 2. nevertheless, the Poles did everything they could, 3. as evidenced by the fact that they have the greatest number of Trees for the Righteous Among Nations in Yad Vashem in Jerusalem. I call this a ‘composition with a tree’. Poland was not the only country where hiding Jews was a capital offence: this was also the case in Russia and Serbia, nor does the death penalty change anything because basically everything was punishable by death: selling meat, killing a pig, owning a gun, joining the resistance, as well as a number of other things. The death penalty didn’t actually deter anyone from doing anything: neither from selling meat nor from being involved with the resistance. This ‘composition with a tree’ is precisely the kind of nationalist falsehood that is being handed down to yet another generation: I , too, was subjected to it at school – it is a wall that bars generations of Poles from facing the fact that it was precisely the other way round. There was a popular saying that summed up the Jewish aspect of the occupation: ‘there’s one thing Hitler deserves to have a monument built for and that’s getting rid of the Jews’. Or ‘they solved our problem with their own hands’. But it wasn’t just their hands. As far as the Jewish issue was concerned the Poles very often collaborated with the Nazis. If you understand that your own history has not been uniformly noble, you will eventually understand that something needs to be changed, rectified, reformed. But if everything was all right, or even better than all right, there is no need to change anything. And this has been left unprocessed. By way of contrast, let’s look at Germany. They have worked through Nazism, have drawn lessons from their own history as it really was, not the way they wished it had been, and as a result they said to themselves and to refugees: ‘this time we are in a different place, this time we are human beings who understand the suffering of other human beings.’ In Poland, by contrast, we keep ignoring the suffering of others. The Polish response to refugees has been: ‘What’s this got to do with me?’ And a more radical version goes: ‘We’ll deal with you the way Hitler dealt with the Jews!’ […] There is no sign of empathy, not even a hint of pity on the horizon.”
Photo: Andrzej Gregoriew