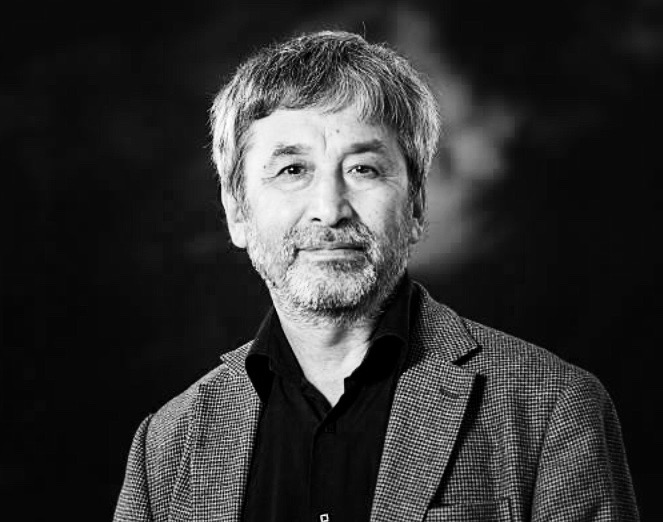 is an Uzbek novelist and poet who was born in an ancient city in what is now Kyrgyzstan, and was forced to leave his home in Tashkent when his writing brought him to the attention of government officials. Under threat of arrest, he moved to London and joined the BBC World Service, where he is now Head of the Central Asian Service. In addition to journalism, Ismailov is a prolific writer of poetry and prose, and his books have been published in Uzbek, Russian, French, German, Turkish, English and other languages. His work is still banned in Uzbekistan. He is the author of many novels, including Two Lost to Life, The Railway, Hostage to Celestial Turks, Googling for Soul, The Underground, A Poet and Bin-Laden, and The Dead Lake; poetry collections including Sad (Garden) and Pustynya (Desert); and books of visual poetry including Post Faustum and Kniga Otsutstvi. He has translated Russian and Western classics into Uzbek, and Uzbek and Persian classics into Russian and several Western languages. His most recent book, The Devil’s Dance, will be published in 2018. Writing in 2010 about ethnic clashes in Southern Kyrgyzstan, Hamid Ismailov said: “After the collapse of the Soviet Union, the city of Osh – where the latest inter-ethnic clashes between Kyrgyzs and Uzbeks started – has also become a major centre for drug trafficking from Afghanistan, as well as for the flow of goods from Western China. That has created a fertile ground for organised crime and wide corruption. It’s widely believed that Uzbeks were largely running this trade with the patronage of predominantly Kyrgyz officials. The April uprising which brought down President Bakiev broke this system. That’s created a power vacuum, and both political and criminal structures are seeking to exploit existing ethnic tensions for their own purposes. That’s not the entire explanation for the current turmoil, but it’s a significant undercurrent, feeding the violence that has killed so many innocent citizens. It’s all true: as true as the facts of horrific, savage atrocities which have claimed the lives of hundreds and made dozens of thousands flee their burnt and ruined homes, as true as the fact that some brave Kyrgyz and Uzbeks have sheltered each other, as true as the fact that in these kinds of tragic events there are no winners, everyone loses. Yes, it’s all true. One sickening thought chases me these days: is all our so-called ‘civilisation’ as thin as the shirt and tie we wear, and under the skin hides a beast – be it a mobbing youth or agitated intellectual – which knows in his ravaging wildness only ‘us’ and ‘them’? This question is not just to my Central Asian compatriots, but also to football fans and to those who wage the war in the name of terror and those who retaliate with the same.”
Photo: Pako Mara