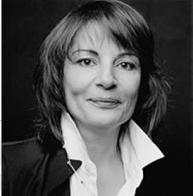 is a Lebanese urban anthropologist. She studied sociology at Université Lyon II and taught at universities in France, Algeria and Lebanon. In 2004 she organized a conference “Days of the Arab World” for the German Bundestag. She has published articles on issues such as the economic and social rise of the Lebanese Shia. She is based in Beirut working with the French Institute in Beirut, on behalf of the German Bundestag, to promote dialogue between Germany and Arab world. “Terrorist attacks are not events, not an aberration of history, nor a speciality of uncivilised people. They are not only criminal. And they are never solely the work of outsiders. Through the damage they inflict, they question our vision of democracy. They challenge our awareness and question the actions we undertake to protect ourselves. Once again, terrorism shows us that it can take advantage of our unresolved problems and conflicts, that it can exploit our failure to react with courage and honesty to the changes in our societies, and in the world. Terrorism shows us in an extreme way that our ethics as well as our goodwill are not working. Fighting terrorism is our common responsibility, as democrats in the Middle East (and that includes Israel), in the United States, in Europe (and that includes immigrants, Muslims and others). We will have to act jointly without distinction between nationalities, ethnicities or religions. We must support participation as against denunciation, partnership as against arrogance, integration not marginality, justice and rights not injustice, and consensus as against arbitrary power. Power without consensus can make things worse. Unchecked power, the sole reliance on power can be another form of terror. We must protect ourselves from our own demons. In order to protect democracy, we should ask for more participation of all the groups in our societies. We should ask that everyone makes it their responsibility to work to build a civil and democratic global consensus against terror.”